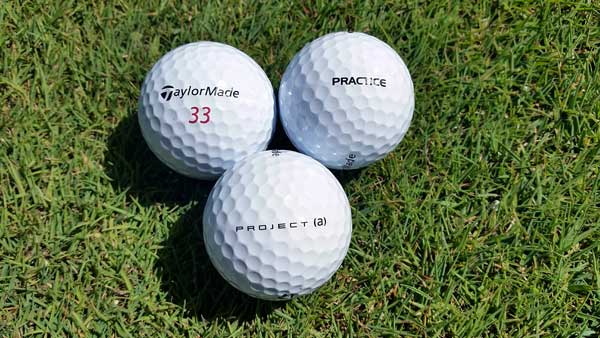 It’s never too late for New Year’s Resolutions, so why not make a new “resolution” for 2016 to lower your handicap by working on shots hit from 100 yards and in?  The under hundred distance is the one area of the golf game that costs a majority of us the most strokes every round.

The new “red” target flags are now in place on the practice tee.  These flags start out at 20 yards and go up to 90 yards in ten yard increments, measured from the middle of the practice tee.   In addition to the new target flags, we now have new TaylorMade project (a) practice balls that will provide for a much better feel over the limited flight or “Cayman” balls.  Real golf balls and full shots with wedges will give you a more realistic practice session. 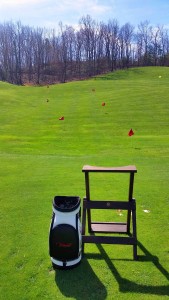 To take advantage of this new setup, try the practice drill laid out below.  It is designed to help you hone in and perfect those shots and situations we find ourselves in quite often on our golf course.

The short game accounts for an average of 50% of your shots per round, so you should give it at least 50% of your game improvement time!

One of the major differences between the average player and Tour pro is distance control with the wedges. Within 100 yards they seem to have a “sixth sense” for hitting it close from ANY distance. To get to your potential you’ll have to become as precise as the pros so take a moment and read the rest of this blog which will help show you a couple of ways to do it.

Let’s say your average distance with a FULL gap wedge (52 degree) is about 115 yards, a SW (56 degree) 100 yards, and a Lob Wedge (60 degree) is about 80 yards.  You should be pretty accurate most of the time at those distances, but how often are you exactly  those distances away from the hole? What if you’re 93 yards away? If you hit a full SW you’ll be at least seven yards (or 21ft) away, which is most likely a two putt.

But…what if you had a 90 yard shot and you could get within one putt range a lot more often? This could save at least five shots per round!

This one is used by many tour players such as Phil Mickelson and was used some of the greats like Nick Faldo, Tom Kite, Vijay Singh and Annika Sorenstam.

1. Take three wedges PW, SW and LW. Assuming you know exactly how far each one goes.

2. Some players gauge distance by how hard they swing (“I think this is an easy PW”, or “I think this is a hard SW”) but tempo is one of the most important parts of a good swing and should not be tampered with. So with this concept, we’re going to keep tempo constant and control the length of the back-swing using an imaginary clock-face.

With each club hit three balls, one with a full swing (12 O’clock), the next with a 10 to 11 O’clock swing and another at 9 o’clock. See how far each one flies and focus on consistently getting your hands into those clock positions. It’s important to record these distances, so you can start to see the average distance these shots go.

Note: Don’t think about your swing at all during your rounds. Save this gauging of your new distances for practice time and then rely on feel when you’re on the course. With practice you’ll start to gain consistency with those distances and you won’t need to think about the clock-face because it will be instinctive.

Choking down & ball position to control distance with your wedges

Another way to control distance with your wedges is using trajectory.

2. For example, hit a SW from the center of your stance. This should fly the distance of your regular SW. Next, try moving it two inches further back and see how far that flies. It might take five yards off it (on average). Do the same moving it two inches in front of center and record this distance also.

3. Go through all three wedges and hit as many different shots from different positions in your stance. Use inches as calibration and record each distance. Over time you’ll notice average distances.

4. You can also do the same with your grip position. With each shot you can try choking down an inch on the club and see how that affects the flight and distance.

With both these drills focusing on the techniques during practice will mean you don’t have to do it on the course – they’ll be a habit. Give them a go and you’ll gain at least nine new shots to your short game you didn’t have before and these will result in more shots closer to the pin and a reduction in putts per round.

Schedule some time with your Waterfall Club teaching pros and let Blake or me show you all of the new equipment and concepts that the Club has committed to you to help lower your handicap and increase your enjoyment of the game.